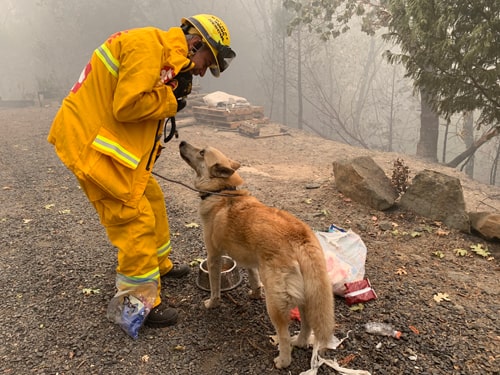 On the afternoon of September 8, 2020, the Bear Fire (later renamed the North Complex West Fire) exploded, generating immediate evacuation orders for communities east of Oroville.  It raged and burned over 200,000 acres overnight.  It would ultimately kill 16 people and an uncountable number of animals.  Almost 2,500 structures were destroyed, roughly 1,500 of which were homes.

We pause to honor and recognize the anniversary of that tragic fire.

At 3:00 pm on September 8, NVADG and Butte County Animal Control scrambled to manage the animal rescue operation.  We opened our small- and large-animal shelters and took in animals all night.  By 4:00 am, the small-animal shelter was full.

Our hotline volunteers answered calls and took requests for service all night.

These efforts would continue for 45 days.  We would care for over 1,500 animals.  Hundreds of volunteers and paid workers would coordinate to meet the need.  Financial donations would enable specialized and mundane resources to be brought in.  Supply donations would assist so many who suddenly had nothing but their pets and whatever else they threw in their cars.

For those of us involved with North Valley Animal Disaster Group – who had operated 78 days during the Camp Fire – we realized that this was how fires would be. More disastrous.  Evacuations would be longer.  Animal care would need more coordination and more resources. This is confirmed this year, as we respond to the Dixie and Caldor Fires.

We remember the Bear/North Complex Fire and its devastation to our communities in Butte County.

We pause to remember those who passed away.

We pause to thank all the people and organizations that made the animal rescue possible.  Our NVADG volunteers; city, county and state workers who joined the effort; animal rescue groups like IFAW who came immediately to help; donors, and more.

We smile to think of the animals we helped.  Take a look at our Bear/North Complex Photo Gallery of pictures and get a few smiles yourself.

And finally, we give a shout-out to people who are ready for wildfire, ready to evacuate with their pets and have a plan for their large animals.  The Bear/North Complex evacuation happened almost without warning. We encourage our community to be ready if it happens again.  Evacuate early, take your pets with you, have a plan for your large animals.

If you are interested in volunteering with NVADG and responding when your community needs you, our next New Volunteer training is January 15 & 16, 2022.

Following us on social media is the best way to get updates during an emergency/evacuation!

We have made every effort to be ADA Compliant. If you are experiencing an issue, please contact us.